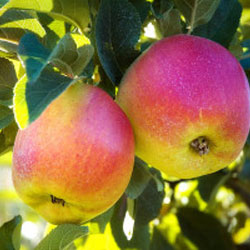 On a steamy evening this July, John Bunker and his wife, Cammy Watts, padded down into the root cellar at their organic farm in Maine and rustled through a collection of wooden bins until they found what they were after: six purple-skinned, white-freckled apples, which had spent the past eight months sitting in repose in the cool darkness. The couple turned a pair of the Black Oxfords over in their hands, then cut one of them into quarters and bit into the crisp pieces. They agreed that the fruit was still delicious—not to be confused with Delicious, as in Red Delicious, the most ubiquitous apple variety in the United States. Left to sit that long, a Red Delicious apple and the rest of its supermarket ilk would have long ago turned to mush.

The Black Oxford, a 225-year-old variety famous for its longevity, is one of the dozens of idiosyncratic fruits that Bunker and Watts deliver to members of Out on a Limb, their community-supported agriculture operation. Every two weeks throughout fall, members receive 10 to 12 pounds of rare apples sourced from heritage and organic orchards in Maine. Some are meant for eating fresh. Some make great cider. Some, the silkiest applesauce. Some have the snap for a stupendous pie. And all it takes is a taste of one of those pies to understand what we’ve been missing.