The Best Brownies Ever

My friend Oscar Turner makes the very best brownies; thick, dense and chewy with a triple chocolate punch and packed with savory, chopped nuts.  The perfect afternoon snack, and a great addition to the lunchbox, Oscar’s Brownies have no equal.  When I inquired about the formula, his wife Diana was gracious enough to share the recipe.

“ So – the brownies are totally Oscar’s doing.  He uses a box mix, Ghirardelli Double Chocolate, to which he adds between a half and a whole bag of 60% cacao Ghirardelli chocolate chips and a cup or two of chopped pecans, really as many goodies as the batter will hold.

The trick is not to bake it too long.

You want to take it out when your cake-testing skewer still has some sticky bits on it when you pull it out.

He chills it in the freezer so it can be cut up.”

The “brownie”, one of America’s favorite treats, originated here in the states, with the first recipe appearing in print in the early 20th century.  Most food historians credit Fanny Farmer, who in 1905 adapted her chocolate cookie recipe to a bar cookie baked in a rectangular pan.  Although there are numerous legends surrounding the origin of the brownie, my favorite is that the brownie hails from Bangor, Maine.

Mildred “Brownie” Schrumpf, Orono food educator, author and home economist published the recipe for Bangor Brownies in her book “The Flavor of Maine.”   Schrumpf (whose nickname Brownie was from her maiden name Brown) tells of a housewife making a chocolate cake that forgot to add the baking powder.  Rather than throwing out the confection when it didn’t rise properly, she cut it into flat squares and served it as a “brownie”.

It was in the 1920’s that the recipe for the brownie evolved to become the popular chocolate confection that it is today.  After World War II, big flour mills created a “demand” for products that would create “convenience” in the busy, modern world.  By the end of the 1940’s, more than 200 companies were producing baking mixes, with Betty Crocker and Pillsbury in the lead, later to be followed by Duncan Hines and General Mills.

When I was growing up on the farm in the late 1950’s and 60’s, our family always cooked from scratch except for brownies, because the best brownies always came from a box.

If you’re a purist, here’s a recipe for fudgy brownies (https://cherylwixsonskitchen.com/recipe/superbowl-fudgy-brownies/) made the traditional way.  For me, I’m sticking with the recipe for Oscar’s Brownies, the best brownies ever! 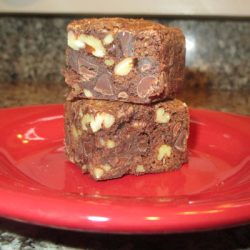