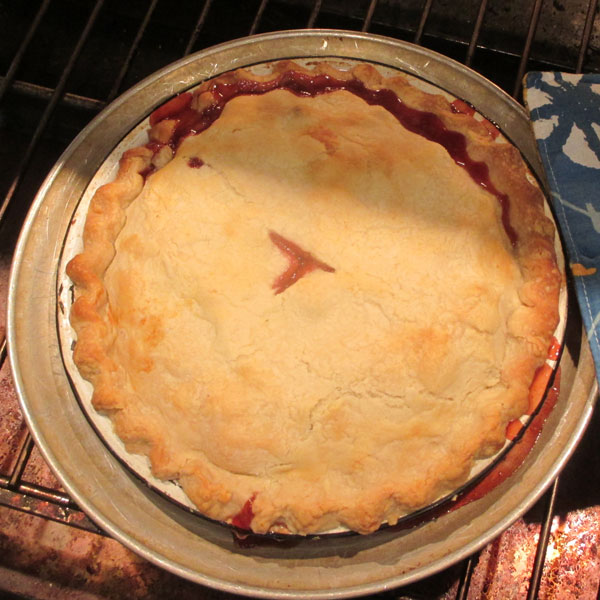 Apple pie may be America’s favorite, but in our family, Strawberry Rhubarb Pie takes the prize. New Englanders have had a long love affair with rhubarb, the mouth-puckering herbaceous perennial that is actually vegetable and usually eaten as a fruit.

Originally cultivated as an ornamental and used medicinally by the Chinese, rhubarb did not enter the kitchen until the 17th century, when sugar became available to the masses. The plant migrated to New England with the early settlers, and was a homestead staple planted behind the barn. I recall eating copious bowls of rhubarb sauce as a child, and dipping raw stalks of rhubarb in sugar for a snack.
Recipes for rhubarb pie are frequent in older cookbooks. Often the chopped fruit is combined with an egg and liberal amounts of sugar. The Brits enjoy their rhubarb flavored with ginger. Savory rhubarb dishes include beets roasted with rhubarb, grilled meats topped with a rhubarb, dried cherry and onion sauce, and rhubarb salad with goat cheese.

Seasonally speaking, the classic combination of strawberries and rhubarb has always intrigued me. Just about the time the strawberries are ready for picking, my rhubarb plant is exhausted. The tall, bushy stalks of rhubarb flowers towering over withered leaves is a tell tale sign that the plant has gone to seed.

This year, I took the opportunity to use the last of my frozen strawberries to make the pie. The recipe, a family favorite handed down from Grammy Munsie, uses flour to thicken the fruit. Cornstarch works well too. The quantity of rhubarb versus strawberries can vary, depending upon the kitchen inventory. A total of at least five cups is needed to make a plump pie.

Be sure to cook your pie long enough. When the juices start to bubble, don’t be tempted to remove the pie from the oven. A really long bake, an hour at least, followed by cooling the pie completely, produces a pie that can be easily sliced and served.

This recipe uses only one cup of sugar to sweeten the pie. Although it may be too tart for some, our family loves the sweet-sour contrast between the strawberries and rhubarb surrounded by the flaky piecrust. In our household, Strawberry Rhubarb Pie is the perfect spring supper! 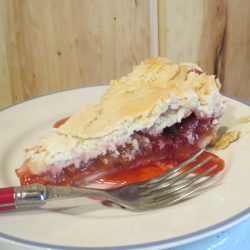