Onion Soup or in French, soupe l’oignon, has a storied history.  References for the soup date back to the Romans, and it was originally considered fare for the poor, as onions were plentiful; easy to grow and simple to store.  The modern recipe, based on caramelized onions in a rich, beef broth originates from 18th century France.

In the 1960’s, French Onion Soup underwent resurgence in popularity, no doubt because of American interest in French cuisine inspired by the Kennedy White House and Julia Child.  Topped with a crouton and melted cheese, French Onion Soup is a delicious start to a festive meal, or hearty luncheon soup with sandwich.

The onion is the most widely used vegetable in all cuisines.  Sweet onions, red onions, shallots, leeks, and white onions are all forms of alliums.  Pungent when fresh, their sugars break down with heat and when cooked for a long period of time, start to caramelize.  This process produces the rich brown flavor and depth of a French Onion Soup.

The recipe for Slow Cooker French Onion Soup is adapted from the February issue of Eating Well magazine.  Using a high heat setting, the slow cooker caramelizes the onions for eight hours or more.  Then a hot-brandy or sherry-spiked broth is added just before serving.   For a true bistro-inspired version, ladle the soup into oven-proof bowls and place them on a sheet pan.  Top each bowl of soup with a baguette slice, sprinkle with grated cheese, and bake or broil until bubbly. 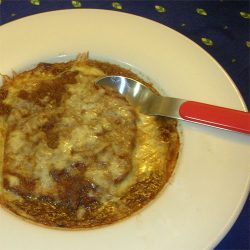 Cheryl Wixson
This delicious soup keeps for several days in the refrigerator, or freeze to enjoy another time.
Print Recipe Pin Recipe