Say Cheesecake, Lobster That Is 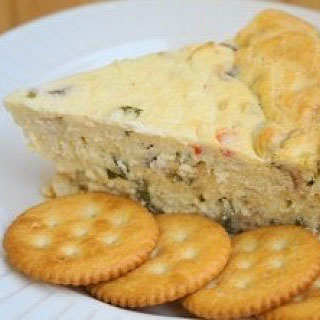 Every month, I have the opportunity to showcase the delicious Maine foods in season and cook a meal for 200 folks. With the help of a dedicated group of volunteers, we source ingredients, most often from island gardeners, farmers and fishing folks, create the menu, and spend a week-end chopping, dicing and prepping for the Monday night supper.

As would be expected in a fishing community, our menus often feature the bounty of the sea, including lobster. In the past year, we’ve served up Lobster Mac & Cheese, Seafood Chowder with lobster, and Lobster Spring Rolls with cranberry applesauce at this free community meal called Dinner is Served.

Red Barn Farm in Stonington, owned by Donna and Marsden Brewer, regularly donates 2 dozen eggs and three pounds of their soft goat cheese, or chevre. It’s such a luxury to work with local artisan goat cheese. I use chevre instead of cream cheese (filled with gums and chemicals), whipping up cheesecakes, dips and spreads. This month, it was the star appetizer for the meal as part of Lobster Cheesecake.

The recipe for this savory cheesecake dates back to a class I taught on Maine Lobster Cuisine in 2005. At the time, I was developing recipes for the Maine Lobster Promotion Council, and educating consumers on the rich culinary history of the Maine lobster. Recipes for the preparation to fry, stew, and “boil to eat cold the common way” appeared in the 1664 edition of The Accomplished Cook: the Art and Mastery of Cooking.

In the 1850’s, thrifty Maine housewives developed numerous recipes like Lobster and Noodle Ring, Lobster Croquette, and Lobster Rarebit. Today, thanks to excellent management of the resource, there remains an abundance of Maine lobster. Like many folks, we have frozen lobster meat, the remains of entertaining summer visitors with lobster bakes. Add a pound of your favorite local Maine goat cheese and enjoy a Lobster Cheesecake.