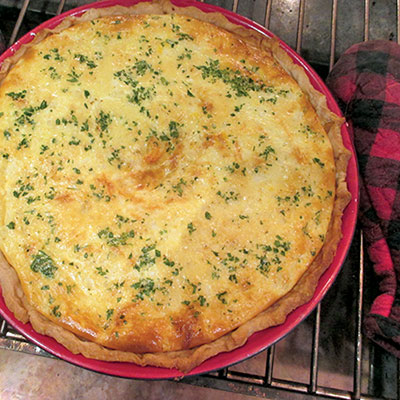 Every year in January we have an artistic project here on Deer Isle known as Fun-A-Day. The premise is simple: participants pick a project like take a photograph, paint a series of pictures, create a quilt, or bake a cake, and work on it every day. Then in February, we share our work with the community and have a big Fun-A-Day group show.

It’s a super fun way to pass those doldrums days of January, and makes the month go by wicked fast. Plus, enjoying the creativity of your friends and neighbors at the start of February is inspiring enough to last the winter into spring.

Last year, I went Wild! and made 31 different wild blueberry recipes. It was a delicious and nutritious adventure that left my recipe testers with very “blue” teeth.

It took a lot of thinking to figure out a culinary themed project for 2020, until I discovered the recipe for Ruth’s Crabmeat Quiche in my late-mother-in-law’s recipe box. The note card, probably scripted in the 1960’s, was written in Munsie’s elegant cursive, and stained with pastry dough.

The formula was simple enough, and with a pre-made pastry shell, the pie took less than 15 minutes to prepare. But the best part was that Ruth’s Crabmeat Quiche was absolutely delicious!

The Swiss cheese (I used packaged, pre-grated) added just enough depth of flavor to allow the sweetness of the crabmeat to really shine. The minced onion kept the filling more savory than sweet, while the combination of cream and milk with the eggs was sensuously rich.

Although the recipe suggests fresh crabmeat, I used frozen instead, which worked quite well. Just be sure to squeeze out any extra water after the crabmeat has been defrosted.

For the pastry crust, try using a frozen pre-made shell. Allow the dough to defrost, carefully remove it from the pan to a floured surface, and roll the dough out to fit your quiche pan or 12-inch pie plate. It works. Or, as the recipe notes, you can keep the dough in the store-bought pan, and use only 3 eggs and 1 ½ cups cream.

In The Flavor of Maine, a cookbook with recipes in honor of the bicentennial of the United States published in 1976, author Mildred “Brownie” Schrumpf wrote, “the flavor of Maine cooking is an elusive quality found only in Maine”. The Queen of Maine food, and the culinary icon of her times, Brownie was right on.

So send those recipes, family stories, and recipe cards, even photos along to me. There are hundreds of old family favorites here in Maine that I want to capture for generations to come to cook and enjoy. 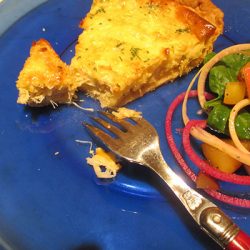