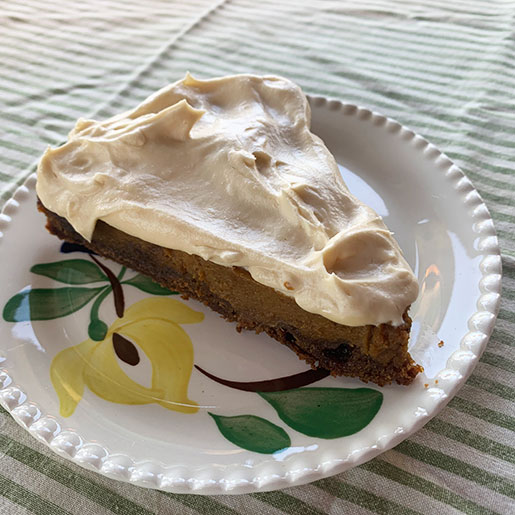 Long before Columbus landed in the New World, the Native Americans were cultivating and eating pumpkins.  Grown together with corn and pole beans in a system known as the three sisters, the pumpkin was an important nutritional staple of early American life.  Strips of pumpkin were roasted and dried for winter storage, later made into corn bread, cake or pudding.  Pumpkin seeds were roasted for both food and medicine.

Food historian records indicate that our ancestors enjoyed pumpkin at their second Thanksgiving celebration, but not in the form of pie.  Instead, they made a sweet dessert by filling the inside of a pumpkin with milk, spices and honey and baked it in the ashes.  The settlers also made pumpkin soup, and my favorite, pumpkin beer.

Pumpkin is a member of the cucurbita pepo species of squash, which includes zucchini and our favorite Halloween jack-o-lantern.  Sadly, about 80% of the pumpkin crop grown in the United States today is not destined for the dining room table.  While the large and giant pumpkins are quite decorative, they really aren’t very tasty.  The flesh is stringy and bland, and filled with water.

The smaller pie pumpkins varieties like Winter Luxury, New England Pie and Cinnamon Girl, have a dense, sweet flesh that makes up into delicious sweet and savory dishes.

The recipe for Pumpkin Maple Pie is an adaptation of an old family favorite with a nod to today’s cooking and eating styles.

Instead of the traditional wheat flour, lard and/or butter pastry crust, this confection starts with a gingersnap cookie crust.  For the gluten-free guest on your Thanksgiving Day list, this is the perfect confection, as there are several varieties of gluten-free gingersnaps commercially available.

Enjoy growing your own vegetables or buying local?  Instead of canned pumpkin, try baking a pie pumpkin, and then pureeing the flesh.  A five- pound pumpkin, pierced with tiny vent holes and baked in a 350 degree over until slumped, will yield about 4 cups of pulp, enough for two pies.

Using Maine maple syrup in the pie filling, and in the whipped cream topping, adds a deep, rich flavor.  And is another delicious way to support our local farming community.

The added bonus in your holiday preparations just might be that Pumpkin Maple Pie with Gingersnap Crust can be baked several days in advance of the big meal.  Store the naked pie in the refrigerator, covered, until ready to serve.  Prepare the whipped cream topping and enjoy. 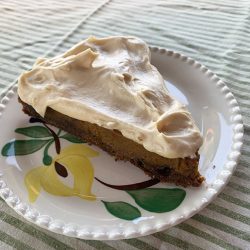