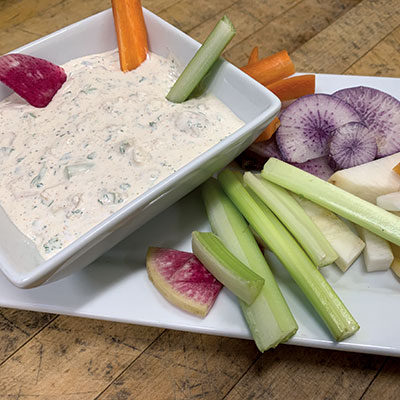 Last week was Arts Week at Deer Isle – Stonington High School, and the theme was a celebration of Maine’s bicentennial. Once part of Massachusetts, Maine became independent—very independent—in March of 1820.  For the entire week, over 120 teenagers were engrossed in studying the history of Maine and Deer Isle, and creating works of art that reflected their newfound knowledge.

I had the pleasure of leading 10 teen-agers on a culinary adventure exploring the pathways of Maine food.  We investigated and cooked with foods indigenous to our island like clams, wild blueberries, cranberries, maple syrup, and fish.  Our journey also went around the world when we learned that dairy cows came from Spain, the Netherlands and Switzerland, arriving in the New World as early as Christopher Columbus.

The pineapple, one of the world’s most popular tropical fruits, originated in Brazil, and was transported to tropical islands by sea merchants.  Portuguese explorers spread the pineapple throughout the world, bringing it to Africa and India.   Unripe or green pineapples were packed in the holds of ships, and were once a status symbol that only the wealthy could afford.  Pineapples that our ancestors enjoyed probably came to New England around 1864.

The clam, indigenous to our island, can live to be over 500 years old.  An important economic resource for the state, clams have sustained Mainers for generations.  The first family to settle on Deer Isle lived on clams and other shellfish for two years before their homestead also included a dairy cow, chickens, and a pig.

The recipe for Mariner Clam Dip was served as part of a multi-course meal my culinary students prepared for their classmates and the community.  It’s easy to prepare, and keeps for several days in the refrigerator.  Serve Mariner Clam Dip up with lots of veggies for dipping.  We also enjoyed this addictive spread with toasted pita bread wedges rubbed with garlic and olive oil.

Other foods on our menu included Apple Maple Baked Beans, Cornbread prepared with freshly ground dent corn, Wild Blueberry Cranberry Chutney, Old Fashioned Crock Pickles, and Pumpkin Pie with maple whipped cream.  My culinary group of 10 prepared this menu and fed over 300 folks a fantastic, historic, nutritious and delicious Maine meal.  Young folks in the kitchen really rock and this is something to celebrate! 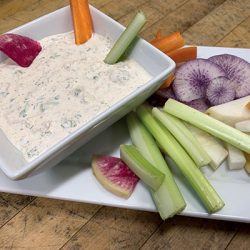