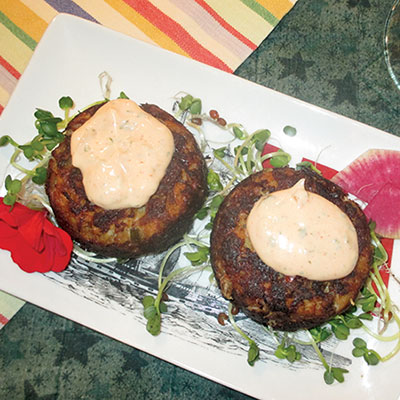 In the late 19th century, crabs were only enjoyed directly along the east and west coasts of the United States. Often found in the traps of lobster fishermen, these crustaceans were considered quite dangerous, as the pinchers of the two front claws could pierce the skin. And the meat was hard to access. (Still is, as the picking of crabs has always been one of the most labor-intensive jobs in the seafood industry. There is no machine that can sort through the cartilage and shell to create the desired results.)

Once the art of handling and picking a crab was mastered, crabmeat became more prevalent in American cuisine, often being shipped to the mid-western states.  Maryland is the east coast state most infamous for this seafood delicacy, prepared with Blue crabs. Native Americans were enjoying a form of crab cakes for years, but when Crosby Gaige published the recipe for “Baltimore Crab Cakes” in his 1930 New York World’s Fair cookbook, the dish became mainstream.

Maine crabmeat comes from two species, “peekytoe” or rock crab, and Jonah crab. Jonah crabs are a bit larger and reddish with large, black-tipped claws, and are found offshore. The smaller rock crab lives closer to shore, in bays and rivers.

Frugal Maine families developed their own recipes for what was often a by-product of lobster fishing. The fishcakes were made from crabmeat, mixed with or rolled in cracker or breadcrumbs, highly seasoned, and bound together with an egg and sometimes milk or cream. These cakes were fried in hot fat (usually lard), and served up with a sauce for supper. Extra cakes were put into a sandwich for the lunchbox.

“Vangie’s Kitchen Corner,” written by Evangeline Knowlton, the late Deer Isle cook and recipe collector, has a formula for “Ed Muskie’s Crab Cakes,” quite similar to the family one originally given to me from Tricia Small.

In my kitchen now, the recipe for Maine Crab Cakes has transcended all culinary frontiers. Because the sweet and delicate meat of Maine crabs marries so well with other flavors, I’ve been tinkering with the recipe. Chopped relish adds a nice sweetness, while Srirachi chil sauce brings up the heat. Horseradish works, as does spicy mustard.

No breadcrumbs? Try potato chips or Ritz crackers and cut back on the salt. Chopped fresh peppers, scallions, chives and onions can also be a part of the mix.  The key is to keep the batter just loose enough to bake and set up. Just be sure to taste the mixture, season, and taste again.

What do I like best about Maine Crab Cakes?

They are baked, not fried.

In addition to the myriad of health benefits, baking versus frying has other advantages, like easier cleanup. Scrubbing out a muffin tin versus emptying a pan of hot oil means more often than not, I’ll make this recipe again. Plus, the batter can be jarred, stored in the refrigerator, and the cakes baked to order.

Serve your crab cakes on a toasted bun slathered with tartar sauce for a sandwich, or over greens with a garlic sauce or Thai dipping sauce for an appetizer or elegant meal. 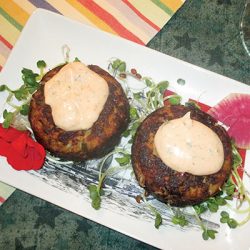