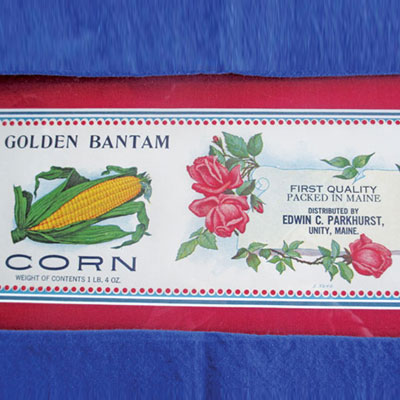 In the book “Cooking Down East”, Marjorie Standish shares a historical note in her preface to the recipe for Maine Corn Chowder:  “Do you feel a surge of pride when you open Maine canned corn?  You will when you recall that America’s canning industry was founded in Maine when Isaac Winslow perfected the steam retort, which made possible the commercial canning of fresh food”

Before the science of safely preserving food in a can was developed, home cooks and commercial operations used glass jars.  Because low-acid foods such as corn, pumpkin and squash, need temperatures higher than that which can be withstood by glass, these foods could not be safely made into the thousands of shelf stable, canned product we now put on our pantry shelves.

Prior to 1846, there were only six commercial food canneries in the United States, one in Portland, and one in Eastport, Maine.  In 1839, Isaac Winslow began the canning or “retorting” of corn in Portland, and in 1862 patented his process.

Unfortunately, the can of Maine “cream style corn” and the version now sold by the industrial food system, contain just one common ingredient: corn.  Starches, gums, modified food thickeners, were not a part of original version of Maine creamed corn.   This food, an important component of Native American cuisine, is actually the combination of corn kernels and the milk released from the pulping or grinding of the corn kernels.   It’s really just corn.

We had a bumper crop of sweet corn this year, and I scraped many ears of cooked corn kernels into plastic bags and froze the bounty.   So it was easy to replace the canned creamed corn with frozen corn in the recipe for Maine Corn Chowder.  Because texture is important in a chowder, be sure to cut your potatoes into nice and evenly sized pieces.  Pureeing some of the soup in a blender or food processor yields a nice, creamy flavor, plus releases the corn milk that sweetens and adds depth to the soup. 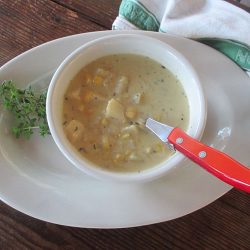