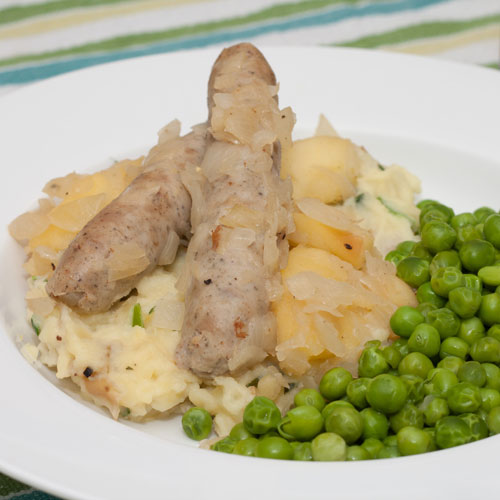 Celeriac, the homely, rough and knobby root is a delicious, underutilized vegetable in our cuisine. A coveted staple in France and the Netherlands, it’s creamy-white interior has a dense texture and a delicate, celery-like flavor. Plus it’s low in starch, and high in fiber, potassium and magnesium and a good source for Vitamins B6 and C.

To properly enjoy celeriac, first you will need to peel away the bumpy, soil-covered exterior with a good, sharp paring knife to reveal the interior white globe. Grated raw celeriac is a satisfying addition to a salad and cubed celeriac makes a delicious part of roasted roots. We love the light, buttery taste when cooked and mashed with our favorite spuds. I often prepare a large batch of mashed potato and celeriac and freeze the extra in jars. It makes for a quick potpie topping or as a part of the recipe for Maine Bangers and Champ.

The term “bangers” dates to the early 1900’s. Its usage became most prevalent during World War II when sausages were made with water and exploded during cooking. Today’s local, handcrafted sausages can be “bangers” too. I’ve had painful experiences of hot fat explosions from sausage cooking.

This recipe is easy and hearty, and surprisingly low in calories. You can be creative and vary the type and flavors of the sausages. This time of year, instead of scallions, I use leeks, cooking them with the potatoes. Sautéed mushrooms would be a savory addition also. In our house, anything “champed” or mashed with potatoes is satisfying comfort food. 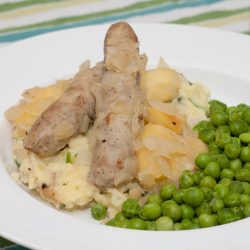 Cheryl Wixson
No need to wait until Saint Patrick’s Day to enjoy Maine Bangers and Champ, a riff on a traditional Irish pub dish. Serve with green peas and a beer!
Servings 4
Print Recipe Pin Recipe