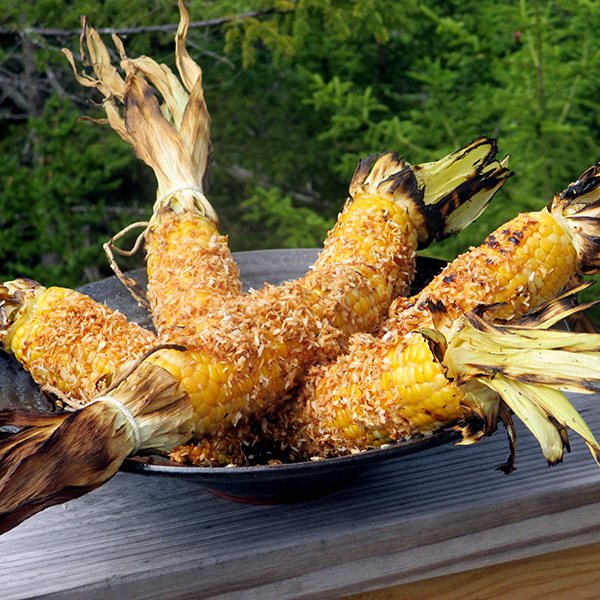 One of our favorite summer vegetables is sweet, corn-on- the-cob, steaming hot, fresh from the kettle, golden butter melting into the crevices and lightly sprinkled with salt. Corn is at its best when freshly picked. I like to cook plenty of extra ears, cutting off the niblets, freezing them to enjoy in winter.

Botanically speaking, corn is truly a grass and a grain, not a vegetable. While all corn is the same species, there are basically six different types: sweet corn, flour corn, dent corn, popcorn, Chinese miniature corn and flint. Sweet corn is for human consumption, and dent corn, the most generally grown, is for animal feed. Flour corn is easy to grind, and flint corn is a harder corn that makes an excellent corn meal and stores better than other types.

Corn comes in a wide variety of colors: small, white niblets, large yellow kernels, and extremely colorful red, almost black and blue. It is a high carbohydrate food, and has been an important nutritional resource for thousands of years. Native Americans taught early New Englanders how to cultivate corn, and how to cook the kernels for succotash and corn chowder, and how to grind them into cornmeal for bread and puddings.

In our garden, the trick has always been to enjoy the corn before the raccoons discover it. This year, we’ve been fortunate, and are harvesting an abundance of the hybrid bicolor XTRA- TENDER 2171 F1. Johnny’s Selected Seeds describes this variety as the best-eating, midseason bi-color. My husband enjoys the 8 inch long ears with evenly spaced, 16 rows of kernels.

With such a wealth, I’ve been on the scout for different and creative culinary ways to enjoy our crop. Grilling corn is not a new technique; I often season the ears with limejuice, olive oil, salt and pepper, wrap them in foil and cook over a hot grill. Fresh herbs, chopped jalapeno peppers, and pesto are other delicious flavorings that really shine.

The idea for Grilled Coconut Corn comes from a recipe in Eating Well magazine. As a true Yankee, it was hard to wrap my head (and taste buds) around the combination of coconut and corn. Hungry for something new, I tried it. Turns out that grilling corn is common to many cuisines; Japanese, Mexican and Asian and this Cambodian-inspired version was crazy delicious.