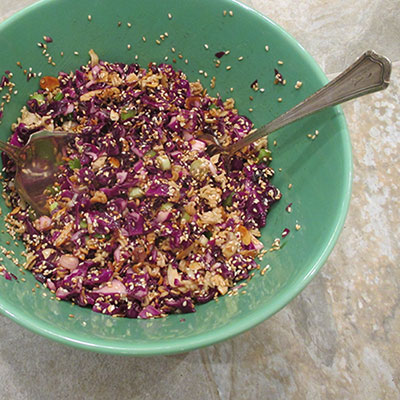 The cabbage, whose name is a derivation of the French word “caboche”, a colloquial term for head, was introduced to the Americas in 1541-42 by Jacques Cartier on his third voyage to Canada.  Although the vegetable became an important New England crop that sustained many homesteading families, the first writing of its cultivation wasn’t recorded until over 100 years later in 1669.

Cabbages were an important food during the Dark ages, and abundant later, during the Middle Ages, as evidenced by the paintings of that era. A significant source of winter food, these members of the brassica family can be grown in most temperate climate zones of the earth. Cabbage comes in many forms; flat, conical, or round, and many colors; almost white, red, magenta, green, and deep-blue green. The heads may be compact or loose, and the leaves curly or plain.

Truly an art form, the magnificent cabbage is also a nutritional powerhouse. Of all the foods now believed to have cancer-preventing effects, few rate as high as cabbage.  Research has shown that consumption of cabbage lowers cholesterol, helps to control diabetes, and plays a significant role in weight loss. An excellent source of iron and Vitamins C & A, cabbage will store in the root cellar well into spring.

Worldwide, Russians consume almost 45 pounds of cabbage per person, per year. While here in the United States, our annual consumption is only about 8 pounds per person, primarily in the form of coleslaw. Although cabbage has developed a reputation of a coarse, even commonplace food, it truly deserves another chance.

Besides the nutritional benefits, cabbage has a wonderful texture, and lots of spicy, sweet, peppery, tangy, and crunchy flavors. A vegetable worthy of the most refined preparations, its sweetness compliments the richness of duck and pork, it can be stuffed with fish or meat, braised, steamed or stir-fried; cabbage is truly a treat by itself.

If your household, like mine, turns up its nose at cabbage, then try the recipe for Crunchy Cabbage Salad. This delicious and addictive salad is Asian-inspired in flavor, and packed with the crunch of toasted sesame seeds, slivered almonds and ramen noodles. Delectable as a side dish, Crunchy Cabbage Salad can also be tossed with cooked chicken or turkey for a complete meal.

Although Peter Rabbit lost one of his shoes in the cabbage patch, it didn’t stop him from enjoying one of the world’s greatest vegetables: cabbage! 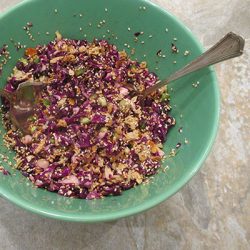 Cheryl Wixson
Bring this addictive salad to your next potluck supper and be a superstar!
Print Recipe Pin Recipe