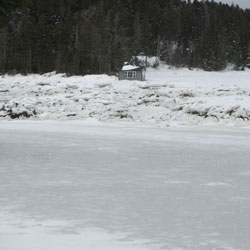 The leeks in my root cellar are holding up remarkably, considering the fluctuations of outside temperatures this winter. As a root storage vegetable, leeks like it quite cold, 32 degrees F., up to 40 degrees the max.

Fat and green, with thick, pale white interiors, the leeks outer leaves are just starting to brown and slime.

Known in France as the “poor man’s asparagus”, leeks may be cultivated year round here in Maine. When we lived in Bangor, in January I once dug leeks covered with snow from a bed by the house. Here in Stonington, we enjoy them from the root cellar, where they will often keep into late March.

Leeks are a welcome green vegetable in deep winter. To clean, remove the outer leaves, and slit the leek in half vertically. Rinse well, and then slice or chop. I like to serve steamed leeks as a side vegetable. Prized by chefs, leeks add a subtle, mild onion – garlic flavor to soups, casseroles and stews.

My latest culinary creation featuring leeks is a recipe for Fish and Leek Pie. Fish pie is a traditional British dish, using a white or smoked fish. It’s totally a comfort food. Flaky white fish, encased in a creamy sauce with peas and leeks, and topped with mashed potato. When the wind blows out of the northeast so hard the house shakes, this is the kind of food I like to eat.