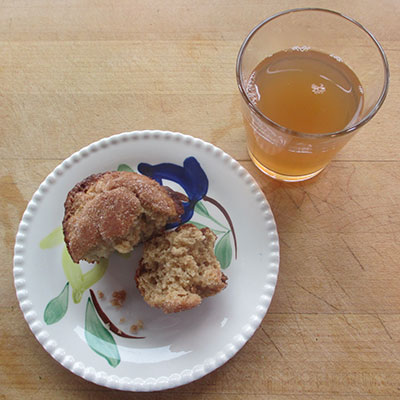 Besides the iconic wild blueberry, Maine apples are one of my favorite year-round fruits. An important crop for the early Colonial settlers, apples were a vital part of homesteading life and used in numerous ways including as a beverage (hard and sweet cider), for animal feed, in baking, cooking and dried, and as a sweetener.

Apple cider syrup or apple molasses was once a kitchen staple, in particular during the Revolutionary War times, as molasses and sugar were imported from British plantations in the West Indies. Much like maple syrup, apple cider syrup is made by boiling down apple cider until it thickens to a syrup consistency; about 1/7 the volume. The product has a long shelf life and was a nutritious way for folks to sweeten and flavor foods. Depending upon the harvest, the apple syrup flavor would vary in complexity and taste, just like a fine wine.

Thanks to our early ancestors and dedicated heritage apple saviors, we can still enjoy the subtle flavors, textures and aromas of dozens of varieties of America’s favorite fruit. Apple picking is a favorite family activity, and the good times are easily continued in the kitchen. Learning to peel and core an apple is an invaluable skill, appropriate for kindergarten–age and older folks. Knife knowledge is the foundation of becoming a chef, and often the difference between loving or hating to cook.

The recipe for Cider Donut Muffins reminds of the donuts our family used to enjoy every fall when we visited Maine orchards and cider houses. The cake-like texture of the batter comes from creaming the butter and sugar, while the flavor comes from boiling down apple cider to make light syrup. Rolling the muffins in butter and then a spiced sugar mixture makes for a delicious, melt-in-your mouth creation. 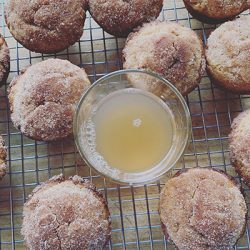