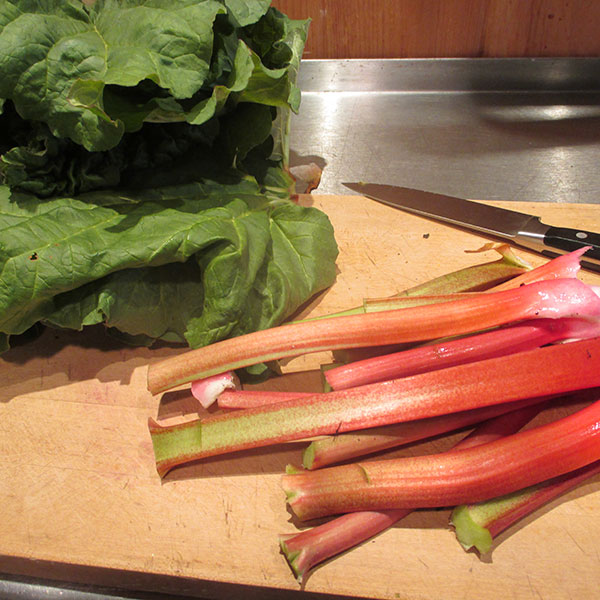 Of all the herbaceous perennials that have accompanied my household every time I’ve moved, the rhubarb plant is the oldest. A member of the buckwheat family, the first rhubarb cultivar traveled to New England via European settlers. Rhubarb was cultivated in Asiatic countries for many centuries before being introduced to Europe in about 1600.

I trace the roots of my rosy-stalked, tart tasting plant back to the family homestead in Norway, Maine. When the Ephraim Crocket family settled on Lake Pennesseewassee in the early 1800’s, they grew many foods, including potatoes, apple trees and rhubarb. The rhubarb enlarged, the plant was divided and moved, and still grows tall today.

My first clump from Norway went to Newport, and then a piece of it followed us to Bangor. As my gardens grew in Bangor, the roots of the plant, happy in rich soil with plenty of organic material, with kept expanding. I happily shared rhubarb with neighbors, friends and family.  Family rhubarb grows in my daughter’s yard in Dryden, New York, and two plants still reside in the Zoidis Park on Central Street in downtown Bangor.

When we moved to Crockett Cove in Stonington, the family rhubarb came too. In good years, the harvest can be over 100 pounds from the majestic plants that line the side of my gardens going up Rabbit Hill.

With so much rhubarb to enjoy, I’ve become a collector of all rhubarb culinary ideas. We’ve consumed Ruby juice, strawberry-rhubarb pie, cheesecake, muffins, custards, tarts, jams, chutney and relish. So when my friend Barrett Gray, proprietor of Boyce’s Motel in Stonington, gave me a piece of rhubarb cake, I had to know the preparation.

“It’s my grandmother’s recipe”, my cooking companion explained to me.

“Except it was for an apple cake and I substituted the rhubarb. You won’t like that it’s made with shortening (not butter).”

Barbara Boyce, Barrett’s grandmother, was an excellent cook and quite renowned for her pies. In 1961, while her husband George fished, she started the motel that Barrett now owns. Barbara’s generous spirit, hospitality and good food were shared with multiple generations of folks both on and off island. “The Baker of Pies”, a collection of her recipes, is a cookbook that Gray printed in her honor for Boyce’s extended family.

In the following adaptation of B’s Rhubarb Cake, the batter contains butter, not shortening, and whole -wheat pastry flour. This a simple, old-fashioned recipe, using black coffee as the primary liquid ingredient. Chopped nuts give the cake a nice rich flavor, and cinnamon mellows out the tart and sweet. Serve this cake warm with coffee, or as a delicious dessert with ice cream. 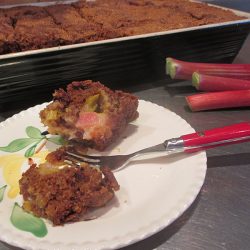 Let cool on a rack and cut into pieces. Yield: 16 pieces