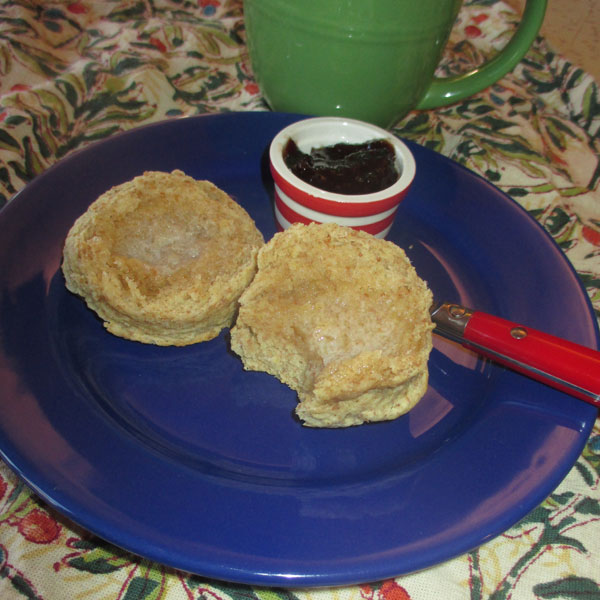 I love a good Maine biscuit, piping hot from the oven, with a toasty brown top and feathery light middle. Spread with butter and jam, a biscuit is a hearty snack. Fry up an egg, add a piece of bacon and a slab of cheddar, the humble biscuit becomes a breakfast sandwich. Leftover biscuits are delicious when split in half, spread generously with butter, and fried in a cast iron pan until golden. Biscuits with a bowl of beef stew, biscuits alongside steamed lobster, biscuits and a plate of baked beans, biscuits for Sunday night supper with strawberries and cream, nothing beats a good Maine biscuit.

My grandmother taught me to make biscuits, and I’ve shaped hundreds of these New England individual-sized quick breads. Biscuits can be either savory or sweet and recipes for biscuits vary; baking powder biscuits, buttermilk biscuits, and old-fashioned, Maine Bakewell cream biscuits.

Bakewell Cream is a leavening agent that when combined with baking soda produces a light and airy biscuit. Developed by Bangor chemist Byron H. Smith during World War II, the primary ingredient is acid sodium pyrophosphate. For those of us growing up in Maine during the 1950’s and 60’s, no pantry was complete without a can of Bakewell Cream.

The basic ingredients for biscuits are simple: flour, milk, salt, cream of tartar (Bakewell Cream), baking soda, and the fat of your choice. The original recipe on the can of Bakewell Cream called for shortening, but depending upon the menu, I like prepare biscuits with bacon fat, lard, or butter.

“Cutting the fat” into the flour is a key to your success. Similar to making a good pie dough, evenly distributed layers of fat produce a silky smooth and light biscuit. It takes a bit of practice to get the feel; the dough should resemble a coarse meal or look like small peas. Don’t overwork the dough, and use a pastry blender or two knives, as the warmth from your hands will often melt the fat.

Be generous with the milk, as dry biscuit dough makes for a tough biscuit. Before cutting, be sure to shape the dough so that it is ¾ inches thick. Thin biscuits often become hockey pucks.
Feeling adventurous? Try adding cheese or snipped fresh chives to your dough. Biscuits the size of a half dollar make delicious cocktail sandwiches when spread with ham or egg salad.
With fresh strawberry season right around the corner, it’s time to whip up a pan of Chef Cheryl’s Maine Biscuits. 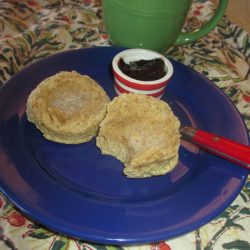 Cheryl Wixson
These light and feathery biscuits can be made with the fat of your choice...it won't change the calories, just deepen the flavors.
Print Recipe Pin Recipe