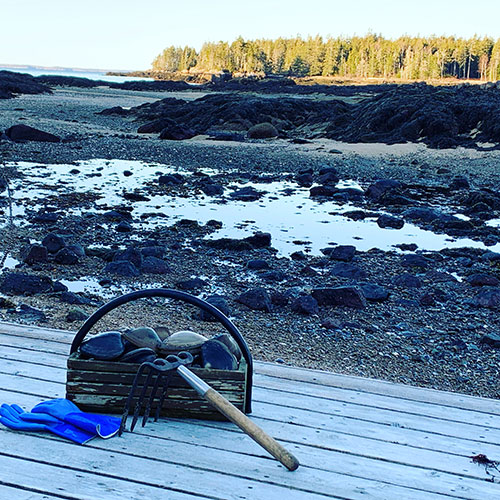 Have you ever walked the beach at low tide and picked up a very large, triangle-shaped clamshell four inches or more across? These are the shells of the Atlantic Surf Clam (Spisula solidissima), a large, hard shell clam found in abundance along the coast of the Northeast and primarily harvested in New England. These clams, also known as “hen” or “surf” clams, can grow to eight inches or more, often weighing more than two pounds, making them one of the largest clams we eat.

The Atlantic Surf Clam is largely harvested by dredging in the Nantucket Shoals, where annual quotas can be as high as 3 million pounds. Rarely sold as a live product to the end consumer, they are used primarily for processed products that include clam juice, clam strips, minced clams, and bait.

At low drain tides, we are fortunate to be able to dig these large bi-valves here in Crockett Cove. In less than an hour, I can dig over a bushel of hen clams, more than 40 pounds. Often called “chowdah” clams, the process of preparing them: shucking, cleaning, removing the bellies and grinding the meat is quite laborious, but yields a very fresh and tasty clam chowder.

The recipe for Maine Clam Chowder is a traditional one and features the use of the glorious and abundant surf clam, widely available as a canned product in your local supermarket. This chowder is nice and thick, creamy with lots of clam flavor, perfectly textured potatoes and pretty pink flecks of clams.

To make ideal chowder, you need to follow a few simple steps, as texture, taste and mouth feel are equally important.  Finely chop the onions, and evenly cube the potatoes. A good chowder is never thickened with flour or cornstarch, only with potatoes, which makes it a nice meal for my gluten-free friends. I often use two varieties of potatoes, both a masher and a baker: one that softens as it cooks and thickens the broth, and one that stays cubed for the final chowder.

Sautéing the onions in a combination of butter and bacon fat lends richness to the broth. Cooking the cubed potatoes in clam juice and whole bay leaves locks in a nice, deep clam flavor.  Instead of canned milk, I favor a mixture of rich milk (raw milk with cream on the top) and cream, added to the soup with the clams. When I feeling extravagant,  I use just straight cream. To finish, I puree a few cups in the blender to achieve the desired consistency and mouth feel, and lightly season the chowder with sea salt and fresh pepper.

The flavor of Maine Clam Chowder only improves with age, and it tastes best four or five days later. For optimum enjoyment, serve this chowder in heated soup cups or bowls with lots of chowder crackers. 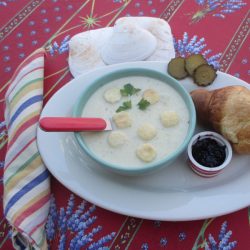 Cheryl Wixson
For a festive repast, enjoy this hearty chowder for lunch or supper with popovers and Maine applesauce
Print Recipe Pin Recipe