Art of the Tart 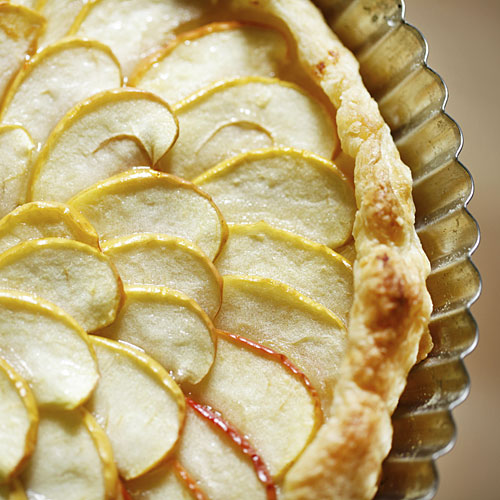 Need an elegant, quick and easy dessert? Rustic apple tarts are a good choice, and the secret ingredient is a commercially prepared puff pastry. In less than an hour, you can prepare, bake and serve a delicious, melt-in-your mouth pastry. Topped with a scoop of ice cream, or even better, whipped cream lightly flavored with maple syrup, this restaurant style dessert is the perfect finale to a simple supper or fancy dinner party.

Puff pastry, or pâté feuilletée as it is known in France, is a light, flaky, leavened pastry containing several layers of fat. A relative of Middle Eastern phyllo dough, puff pastry is often attributed to the 17th century landscape painter Claude Gellée, but food historians trace its origins to Moorish Spain and then through Italy.

Julia Child, in Volume II of “Mastering the Art of French Cooking,” has a wonderful treatise on the art of using puff pastry.

Although I have never made puff pastry, only croissant dough, the production is similar — laborious and time-consuming. A dough is prepared, spread with fat (usually butter) and repeatedly folded and rolled out. The temperature needs to be maintained at no more than 60 degrees to prevent the fat from becoming runny, and the dough must rest between folds to allow the gluten strands time to link up and thus retain the layering.

As the dough bakes, the water from the fat evaporates into steam, creating gaps between the layers, resulting in the flakiness of the pastry. (Croissant dough contains yeast, which also contributes to the light and flaky texture.)

For these tarts, use an apple that retains its shape while baking. We have several varieties of winter storage apples in our root cellar, including Northern Spy, Winter Banana and Belle de Boskoop, which are all delicious. Mix them with your favorite jam, form the dough, fill and bake.

Rustic Apple Tart also will keep in the freezer. Reheat in the toaster oven and enjoy for breakfast!