I love doughnuts. They are my culinary downfall. Not available in pink and orange boxes, my doughnuts are warm and sugary on the outside with an interior texture that literally melts away in your mouth. The homey, spicy aroma of my doughnuts frying in lard brings back fond memories of apron-clad grey-haired ladies at church suppers. Eating my doughnuts feels and tastes good.

Today’s commercially marketed doughnuts are no comparison to what your great- grandmother made. Doughnuts were fried up most every morning and tucked into the lunch box as hearty fare for those logging in the woods, working the fields, or cleaning the barn. Day-old doughnuts were for dunking in piping hot coffee, or fresh, frothy warm milk.

The doughnut has a storied history. Sweetened, fried dough has been around for centuries. The Dutch introduced them as olykoeks – or oily cakes, dough fried in pork fat, to the New World. The hole in the middle increased the surface area exposed to the hot oil and prevented an uncooked middle. During the First World War, Salvation Army volunteer women served doughnuts and hot coffee to homesick soldiers on the front line.

Back in the early 1960’s, I remember the Harris Bakery truck delivering boxes of doughnuts. Freshly fried doughnuts, in large, glass “doughnut jars”, were the staple on counter tops in general stores and local coffee shops. Now, when I want a good, old-fashioned doughnut, I make up a batch and share them with my friends. 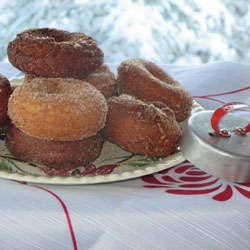